In an interview last year, Don McCullin commented that “If I can haunt people with my pictures I have done my job”. Working in conflict zones throughout the 1960s, the legendary British war photographer focussed attention on previously under-represented issues such as the PTSD experienced by US marines during the Vietnam War. He was one of several photojournalists credited with shaping the ‘visual economy’ of the Northern Irish Troubles in the early seventies. In a Sunday Times photo-story entitled ‘War on the Home Front’, published in December 1971, he captured a series of images illustrating the brutal nature of the clashes between British soldiers and civilians in Derry/Londonderry. Perhaps one of his most iconic images was a photograph of a group of young boys jumping over a graffiti-covered wall after British soldiers had fired CS gas at them, which was compared to an image of a battlefield trench from the First World War.

The iconic nature of this image was cemented when eighties rock band Killing Joke repurposed it for the cover of their eponymous debut album, released in August 1980. Nevertheless, McCullin rejected the suggestion that he was a ‘war photographer’ and later expressed profound regret that these conflict images had so little impact on the longevity of the Troubles. His frustration over the efficacy of this ‘witnessing’ was reflected in the title of his 1973 book: Is anybody taking any notice?

Fast forward four decades and it would appear at least some people are interested in the work of McCullin and his cohort of ‘combat’ photographers during the early days of the Troubles. During my conversation with John Coster as part of the 24 Hour Conflict Reportage Newsroom, we discussed the preliminary results of a new study of mine exploring 100 images tagged #thetroubles on Instagram. I found that many of these had been uploaded to the photosharing site to commemorate the anniversary of key events such as the Battle of the Bogside (August 1969), the Brighton hotel bombing (October 1984), and the assassination of Lord Mountbatten (August 1979). In addition to showing the aftermath of high-profile bomb attacks, many images showed the violent clashes between nationalist youths and members of the security forces that have become so deeply ingrained in collective memories of the Troubles.

What was particularly fascinating was the juxtaposition of ordinary life with the sectarian violence that had erupted in the divided society in the late 1960s. For example, an image originally taken by photojournalist Clive Limpkin showed a young woman standing in the foreground of a rubble-strewn street. It had a certain mutability given that there were no visual clues showing its shooting location, with the exception of the caption which confirmed it had been taken during the Battle of the Bogside.

There were also images showing children playing and even eating ice cream in close proximity to armed British soldiers. The dearth of contextual information meant that they could only be identified as being from Catholic or Protestant working-class neighbourhoods based on the paramilitaries that featured on murals or graffiti captured in the background of these images.

Elsewhere, British army veterans shared photographs of themselves and their colleagues during their tours of Northern Ireland between the early seventies and the mid-nineties. In one case, the caption noted that one of the soldiers that featured in the photograph had been killed by a Provisional IRA sniper in South Armagh a few weeks after it had been taken.

Photographs depicting British army personnel on patrol tended to attract the most antagonistic comments from pro-republican commenters. Photographs posted by British Army veterans were frequently met with antagonistic comments such as ‘Go Home’ and “we’ll fight you for 800 more years”. Their hostile interactions with British military enthusiasts in the comments sections of these images invariably degenerated into arguments over the legitimacy of the British presence in Ireland.

The haunting ‘war photography’ of McCullin and his colleagues appear to have found a new audience on Instagram. Irrespective of whether they are collected or collective memories, it is clear that these photographs do not function as a focal point around which shared narratives on the cause of the conflict can be fostered. Indeed, social media is being used to circulate images that illustrate the persistence of partisan, antagonistic forms of public memory in Northern Ireland, two decades on from the Belfast Agreement.

This post was originally published by the Documentary Media Centre and is reproduced here with their permission. 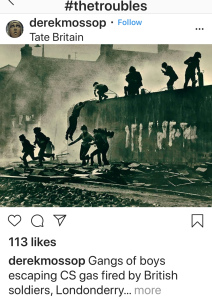 This evening I will be doing an ‘in conversation’ with John Coster (Documentary Media Centre) as part of  the 24 hour Conflict Reportage Newsroom. We will be discussing  my new project on Instagram images of the Northern Irish Troubles, as well as a general chat about media coverage of the conflict. John has put together an excellent set of online (free) resources for those wanting to learn more about the conflict here.

Update: The video of our discussion can be viewed here

Inessential views of art and photography.

A Leverhulme Trust International Network on all things emergency related

Personal blog. All views my own.